4 Beautiful yet Horrifying Graphs of Death from Ottoman Lebanon, 1915-6 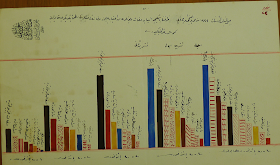 The Ottoman Empire that ruled the Middle East for the four hundred years before the First World War left behind a paper trail of tens of millions of documents, most of which remain unread for the simple reason that few people today can read them, the language itself too arcane, the paleography too illegible and the topics of administrative and bureaucrat niceties too impenetrable.

That is partly why I was so elated to find these hand-painted, colorful bar graphs depicting death rates in Lebanon in 1915-6, a year a half after the outbreak of the First World War.

My moment came on 29 September 2013.  I was doing research for my dissertation in the Ottoman Archives in Istanbul on the causes of the worst famine in the modern history of the Levant.  I was looking for documents that might help explain why so many people died, and the artistically minded Ottoman bureaucrats who ruled Lebanon during the First World War left behind more than a few clues.

The famine that befell this region—Israel/Palestine, Lebanon, Syria and Jordan—a century ago claimed the lives of some 10-15% of the population, with the death figure in Mount Lebanon exceeding 30%.  (By comparison, even the most exaggerated estimates of the current crisis in Syria place total deaths at 300,000, or roughly 1.3% of Syria’s 22 million people).  World War I was 10-15 times worse.


The bar graph above depicts the causes of death (esbab-i vefat) broken down by age group in September, October and November of 1915 in the District of Mount Lebanon, which, during World War I, included the districts of Jezzine, the Shuuf, Beirut, Keserwan, Batrun and Kura.  From left to right, the five age groups are: 1-10, 10-20, 20-40, 40-60, 60-80.  Of course, not every cause of death is represented in each age group, but here are the categories:

The primary cause of death for the 1-40 age groups was the innocuously labeled sefalet-i fiziloyojiye (dark brown), which loosely translates to physical abjection, poverty or destitution.  Also very common in most age groups were tuberculosis (bright red) and infectious diseases (spotted red) and communicable diseases (bright yellow).

There is no mention of starvation in this graph.  This was probably not something to brag home about, certainly not for the bureaucrats ruling over the people starving to death.  Euphemisms have always been part and parcel of state practices: war ministries are peace ministries; military strikes are dove operations; and starvation is poverty or disease.

Accuracy of the Data?

How accurate is the data reflected in this table?  To answer this question, turn to charts  2, 3 and 4. 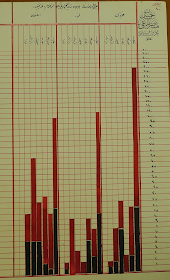 The trend here is difficult to accept at face value, because we know things were getting worse in Mount Lebanon during the summer months of 1915, not better.  But a range of 156-358 still seems reasonable, if not entirely consistent with other, more anecdotal sources of data.  Still, the data is about disease, not famine.  There was no famine, only disease, at least as the Ottoman bureaucrats saw things. 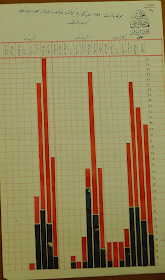 The first thing to notice here is that the categories of death changed.   Presumably there was a personnel shuffle in the Ottoman administrative offices of Mount Lebanon, located in Abey, and the new bureaucrat had a different understanding of disease than his predecessor.  Nothing terribly out of the ordinary so far.

Perhaps the bureaucrats did not collect as much data.  Perhaps those who gathered the fall data was more careless.  Perhaps those who collected the summer data were more careless.  Perhaps no one collected any data at all, and these graphs were instead the imaginative designs of a few Ottoman bureaucrats bored out of their minds who had a penchant for drawing pretty pictures.  Perhaps the data reflected the perceptions of the data collectors rather than the people about whom the data was collected.  We simply have no idea.  But the trends are certainly suspect.

Chart 4 deals with causes of death due to disease in Mount Lebanon in March 1916, April 1916 and May 1916, and the categories (from right to left), are (1) typhus (2) recurring fever (3) typhoid (4) smallpox (çiçek); (4) measles (kızamık) (5) Dysentery, which are more or less the same categories as chart 2.  The bureaucrat seems to have been little bothered by the categories, and just labeled everything typhus.  Here the numbers are fairly consistent with what we know from other sources: people were dying en masse from typhus and other diseases in spring of 1916: 482 total deaths in March 1916, 784 deaths in April 1916 and 444 deaths in May 1916.   These figures seem plausible enough, in part because they are significantly higher than the figures for the previous summer and fall.  This makes sense, because we know that the deaths were rapidly increasing in the spring of 1916.

What to make of all this data?  The Ottoman bureaucrats who ruled Lebanon during the First World War certainly collected data.  In a series of dozens of other graphs and charts not discussed above, they carefully documented the exact number people who died from each of these causes of death (and many others), variously broken down (in other graphs) not just by age group or month, but also by district, religion and gender.  It’s hard to believe they would have made up that much data.  They probably thought they were doing their duty as good citizens cum civil servants of the Ottoman Empire, by documenting the death that was happening around them.

We ought to treat this data much as we treat any other historical source.  The more corroborating evidence, the more reliable the source.  The discrepancies discussed above ought to make us suspicious of the precise figures – and even more suspicious of the arbitrary categories.  But the overall picture that emerges is that typhus spread rapidly in the spring 1916 and was killing people in the many hundreds every month in 1916.  This is corroborated by other sources, which I have discussed elsewhere.

Background
Why were so many people dying from Typhus in Lebanon in 1916?

World War I had already begun to affect Mount Lebanon as early as July 1914 when  summer vacationers in Lebanon’s growing tourism industry heard rumors of war in Europe and hurriedly packed their bags to prepare for the impending possibility of war at home.

The Ottomans joined the German war effort in the fall of 1914 and so Britain, France and Russia instituted a blockade of the Mediterranean Coast in December 1914.  Imports and exports came to a halt in Gaza, Jaffa and Beirut.  The economy came to a standstill. The Ottoman military, often times through local proxies, proceeded door to door across Mount Lebanon and confiscated goods, food, stocks of supplies, animals, valuables and cash.The state also monopolized the railways for military purposes, and restricted wheat shipments to the coast out of the fear that they would be shipped abroad. Slowly but surely it became increasingly difficult to transport food across the region. There were new legal regulations and there were no transport animals or railways.

And then it happened.  The worst locust attack in a half century, if not half a millennium.
The pests arrived in the billions and devoured the region’s food supply.  They ate 10-15% of the 1915 winter harvest of wheat and barley and 60-100% of the 1915 summer crops, including fruits, vegetables and legumes.

And so right around the time that Ottoman bureaucrats sat down to draw these incredible graphs, the people of Lebanon, Safed, Jerusalem, Beirut and elsewhere in the region began to starve to death.  Thousands of people lay strewn across the snowy slopes of this extremely rugged region, starving to death, carefully (or not?) documented by these artistic Ottoman bureaucrats.   And so diseases that prey on the malnourished, typhus chief among them, wrecked havoc in Mount Lebanon.

All of the bar graphs can be found at the Başbakanlık Osmanlı Arşivi (BOA) DH.İ.UM.EK 84/9

*special thanks for Chris Gratien for spotting some errors in a previous draft.
Zachary J. Foster at 10:17 AM
Share
‹
›
Home
View web version